Early this summer I decided that the floor of my house was too far gone from termite and rot damage to repair it from underneath. 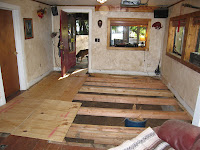 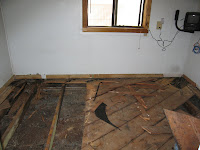 s, the floor beams were impossible to manuver in the cramped space. Kristi and I started tearing up the floor in the master bedroom. We discovered some pretty gross stuff. Roots were growing up through the floor and into the walls. 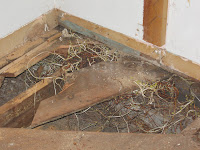 We continued to to tear up and replace the guest bedroom, living room and dining room. Things went pretty quickly and smoothly, as opposed to the crawl space excavations. Then Krisiti went to LA for a dance conference. I was left tearing up the kitchen and bathroom floors. This is where the can of worms gets opened. 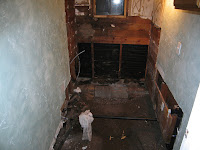 It was obvious that the plumbing was about to have a major catastrophic failure. 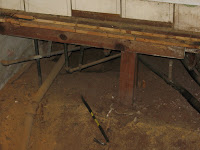 Fortunately for me, my dad was there with his expertise. While I tore out kitchen and bathroom floors and replaced the beams, he roughed out the plumbing. A few leaks later, and after tearing out 2 doors and one wall, we had a tub-shower and toilet again. I noticed only after the kitchen was reinstalled that the drain pipe was a goner, so I had to replace it from the crawlspace. Oh, we didn't have just worms we had a salamander too. 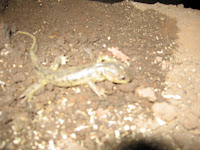 Don't worry, I relocated him to the garden.
Posted by Wade Thorson at 8:08 AM

hey wade! and hi kristie!
looks like it was a ton of work... but it looks to be something that was much needed...i was tripping on the weeds growing in there... those darn things can travel!.... and your salamander was interesting.....wish when i click on him that i would of gotta a closer look...you both will feel really good when its complete... nothing like having things in there places...thanks for sharing....i'm gonna go look at your outdoor travels now....take care....