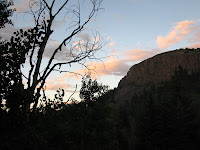 We left our campsite late. The coffee was so good, and we were still tired from having so much fun. We were headed to Lake City, twenty miles away. The drive was beautiful. The road narrowed to a canyon, and we followed the river passing some really cool properties. At Lake City, we went to the tourist office to see what there was to do. We started looking at some maps, and inquired about a trail we could bike without fear of being run over by the many Jeeps that use this area. We were on the other side of the San Juan mountain range now. Lucky for us the trails so far were absent of the ever-present ATV and jeep traffic that was now going to be prevalent on this side. 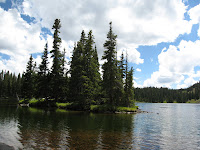 The person at the desk gave us a pamphlet that described the different trails, and what would be allowed on them. We arrived at what appeared to be a bike trail to an alpine lake. Krisiti inquired an older couple as to whether this trail was actually bikable. They said they allow bikes on the trail, but it was not bikable. Oh well, we would just hike it. The trail started a half mile from the parking lot. It was not recommended to drive to the actual trail head, through the cemetery. The road was steep but we tried it. We failed. I had to back down after 2 tries. Oh, well. The rest of the trail was steep, as well. It gained about 3000 feet over 5 miles. We were tuckered out by the time we got to Crystal Lake. It was a nice lake, with a little island, and a decrepit old cabin with the roof falling in. Someone had left some fishing gear unattended, but we couldn't see anybody around. Just as we sat down to have a Cliff bar, we let the dogs off leash. Suddenly the dogs bolted after a squirrel, then YELP! I saw Max recoil. I thought he either got shot or... that low lying branch has fir on it. It was an awfully pointed branch. I grabbed Max and looked. There was a 4x4" gash in the size of an "L." It had torn his skin and we could see the underlying fat. There were no other puncture holes into his abdomen. Phew. He would definitely need stitches. Luckily I brought a first aid kit, and a handkerchief. 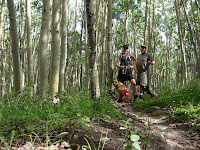 We bandaged him up and tied the handkerchief around him. Time to get back to town. Max trooped all the way back on the trail, with out so much of as a whimper. Back at Lake City I went into a restaurant looking for a phone book and a Vet. There was no vet. Just a clinic, and the doctor went home already. The closest vet was in Gunnison (Gunny). I called the clinic that the restaurant manager recommended, she used to be a Vet Tech. The on call doc called me back, and having described the injury, suggested we wait until 8 the next morning to bring him in. We thought that since it was about an hour away we would try to get half-way. At least we knew a good camping spot. We returned to the same place from the night before.
Posted by Wade Thorson at 10:37 AM